How Many Times Has Trump Filed For Bankrupsy

Under Attack For Bankruptcies

Donald Trump and Bankruptcy: Why has he Filed so Many Cases?

During the Republican primary prior to the 2016 election, Trump was not the only businessperson attempting to win the presidency, though he was certainly the one who received the most press coverage.

One of Trumps challengers was the former chief executive officer of Hewlett-Packard, Carly Fiorina, who used a debate performance in September 2015 to land one of the few attacks on Trump that appeared to bother him.

Discussing the issue of federal debt, Fiorina questioned if Trump was the right person to tackle the issue.

You ran up mountains of debt, as well as losses, using other peoples money, and you were forced to file for bankruptcy not once, not twice, four times.

Trump fired back, saying it was normal for businesses to declare bankruptcy as a strategy. I used the law four times and made a tremendous thing, he said. Im in business. I did a very good job.

Prior to the 2016 presidential election, when people discussed then-candidate Donald Trump, they often focused on his personal finances and how he had run his businesses. One of the common refrains had to do with his bankruptcies. According to pundits and critics, Trump had been unsuccessful in business, having to file bankruptcy several times in order to get by. Some people may have seen those stories and read the reports only to wonder how a person can declare bankruptcy so many times. For someone with the wealth of Donald Trump, how is it possible to keep declaring bankruptcy?

Donald Trump and personal bankrtupcyTo understand Donald Trump and bankruptcy, one must first understand the distinction between personal finances and business finances. Businesses are separate entities according to the law. In particular, corporations have their own legal personhood. They are specifically created so that people can avoid personal financial liability if things happen to go wrong. With this in mind, Donald Trump has actually never declared personal bankruptcy. In each instance, his bankruptcy has been a result of a business failure rather than a personal failure.

There have been many other business bankruptcies. Most of those have involved casinos. While Trump has tried hard in the casino business, he has had a number of failures there. On top of that, his Trump Plaza Hotel had to declare bankruptcy in order to seek ample protections.

Personal Bankruptcies 2020 Based On Demographic Profile

Many misconceptions are flying around when it comes to bankruptcy. But the simple truth is it can happen to anybody.

The American Bankruptcy Institute Statistics clearly show that, while 20% of filers have a college degree, 29% have some form of college education, and 36% are high school graduates. As you might recall, even President Trump has occasionally filed for corporate bankruptcy over the years. While the Trump bankruptcy cases were not individual claims, he has filed a chapter 11 bankruptcy claim as much as six times.

10. Personal bankruptcy rates for males are higher than for females .

According to findings by Dan Mangan at CNBC, men are more likely to file for bankruptcy than women. The gap between the two is very small, but the reasons are very different.

Data on American bankruptcies show that many people filing for bankruptcy are on low household incomes. The figures also show that only 9.2% of people who earn $60,000 per year go bankrupt.

12. According to personal bankruptcy statistics, 64% of people who file for bankruptcy are married.

Trumps companies have filed for Chapter 11 bankruptcy protection, which means a company can remain in business while doing away with many of its debts. The bankruptcy court ultimately approves a corporate budget and a plan to repay remaining debts often, shareholders lose much of their equity.

The Washington Post reported that Trumps Taj Mahal, which opened in April 1990 in Atlantic City, defaulted on interest payments to bondholders six months later. In July 1991, Trumps Taj Mahal filed for bankruptcy. He could not keep up with debts on two other Atlantic City casinos, and those two properties declared bankruptcy in 1992. A fourth property, the Plaza Hotel in New York, declared bankruptcy in 1992 after amassing debt.

NBC reported that Trump Hotels and Casinos Resorts filed for bankruptcy again in 2004 when his casinos, including the Trump Taj Mahal, Trump Marina and Trump Plaza casinos in Atlantic City, and a riverboat casino in Indiana. They had accrued an estimated $1.8 billion in debt. 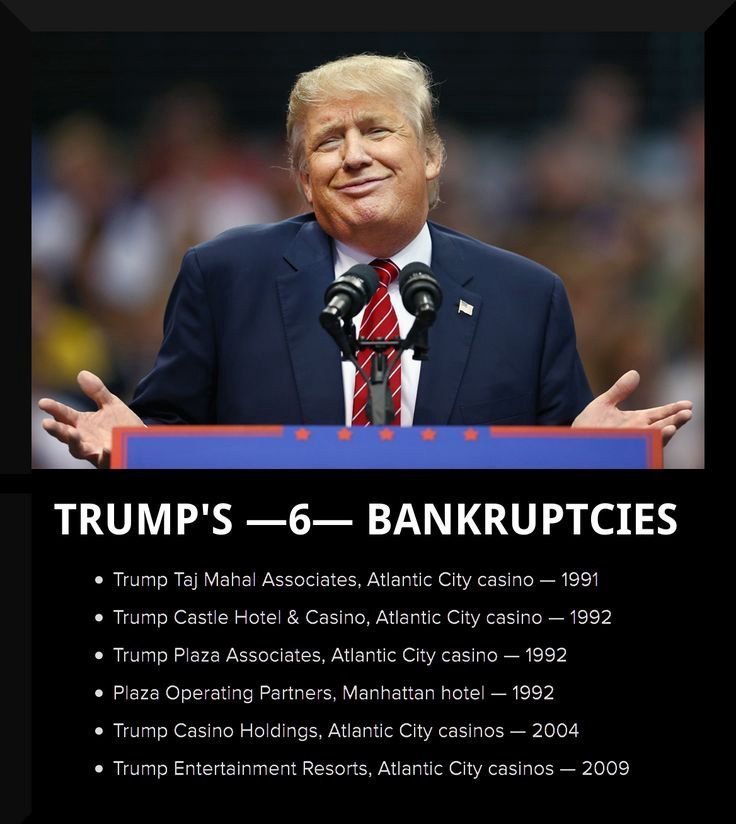 Our company is in the business of offering debt relief to our clients. Bankruptcy often includes shame, fear, and anxiety. We understand how you feel because we have helped so many in getting through what is a stressful time. We know how to confront the issues involved in individual and small business consumer bankruptcy, here in Philadelphia and surrounding areas.

Our most important desire to share our compassion and respect with you, our clients. Our lawyers are well-versed in providing bankruptcy services which include:

When you call us, we will make an appointment for a free consultation if you are considering bankruptcy. Our no-pressure environment will allow you to share with us your financial situation, your options, and come up with the right solution for you. Once we have met, we will guide you in the areas of:

Read Also: What Is The Email Address For President Trump

The Donald J. Trump Foundation was a U.S.-based private foundation established in 1988 for the initial purpose of giving away proceeds from the book Trump: The Art of the Deal by Trump and Tony Schwartz. The foundation’s funds mostly came from donors other than Trump, whose last personal contribution to the charity was in 2008. The top donors to the foundation from 2004 to 2014 were Vince and Linda McMahon of World Wrestling Entertainment, who donated $5 million to the foundation after Trump appeared at WrestleMania in 2007.

Per the foundation’s tax returns, its benefactors included healthcare and sports-related charities, as well as conservative groups. In 2009, for example, the foundation gave $926,750 to about 40 groups, with the biggest donations going to the Arnold Palmer Medical Center Foundation , the New York Presbyterian Hospital , the Police Athletic League , and the Clinton Foundation .

A 2018 suit by the New York State attorney general alleged that Trump had illegally used foundation funds to buy self-portraits, pay off his businesses’ legal obligations, and boost his presidential campaign. The judge ruled against the Donald J. Trump Foundation and ordered Trump to pay $2 million in damages. Trump agreed to give that money and the foundation’s remaining $1.8 million to 8 charities ranging from Army Emergency Relief to the United Negro College Fund to the US Holocaust Memorial Museum and to dissolve the foundation.

Trumped: The Donald Has Filed For Bankruptcy Multiple Times What’s His Strategy And What Can It Teach You

With a net worth in the billions of dollars, you would never have guessed it. But, lo and behold, Donald Trump has filed his businesses for bankruptcy four times since 1991. Was this a mistake? Did the billionaire Trump make a fatal error that caused his corporations to collapse? Just the opposite, in fact. Trump says that every bankruptcy filing was strategic. He even goes further to expand his strategy to the business community, in saying that every high-level business man should take advantageous of the laws, including the laws of bankruptcy. To understand Trump’s decisions, we fist must understand the full situation behind his actions.

Trump had initially financed the establishment by selling north of $1 billion of “junk” bonds, with a promised return of 14 percent interest. When the economy tanked, the Trumpt Taj Mahal was over $3 billion in dept. What Trump then did, to make amends with his lenders, was giving up half of his ownership state and selling his plane and yacht.

What then, were the factors that enabled Trump to create his fortune?

So how are we to rate Donald Trumps business acumen in relative terms? Is the cautious businessman who minimizes risk, rarely fails, and shows a moderate return better than the brash businessman who often takes on highly risky pursuits, strikes out a lot, but also hits his share of grand slams? Thats too subjective a question for us to answer, and the few numbers offered in this trope arent very informative.

Its an oft-cited statistic that Donald Trump has 515 companies, but a number of those businesses are only connected to him in tangential ways and arent owned or directly controlled by him.

Its also an oft-cited statistic that about 80-90% of businesses fail within the first year to eighteen months, but such numbers typically refer to startups and small businesses, while much of Donald Trumps business empire involves expanding and building on existing large business lines and ventures.

The most important takeaway from this trope might be that you cant sum up the world of big business. much less any presidential candidates qualifications, with a couple of numbers devoid of explanation or context.

How many times has Donald Trump went bankrupt ?!!

In 1996, Trump acquired a vacant, 70-story office building at 40 Wall Street in Manhattan, renovated it, and branded it as The Trump Building. In 1998, Conseco and Donald Trump purchased the General Motors Building for $878 million from Corporate Property Investors. The group received a $700 million loan from Lehman Brothers for the purchase and Trump reportedly only committed $15 to $20 million of his own money to the deal. Trump raised the controversial sunken plaza where few pedestrians had ventured, which had been criticized by Huxtable, and installed his name in four-foot gold letters. In 2003, Trump and partners sold the building for $1.4 billion, then the highest price paid for a North American office building, to Macklowe Organization.

After his father died in 1999, Trump and his siblings received equal portions of his father’s estate valued at $250â300 million.

In 2001, Trump completed Trump World Tower, a 72-story residential tower across from the United Nations Headquarters. Trump also began construction on Riverside South, which he dubbed Trump Place, a multi-building development along the Hudson River. He continued to own commercial space in Trump International Hotel and Tower, a 44-story mixed-use tower on Columbus Circle which he acquired in 1996, and also continued to own millions of square feet of other prime Manhattan real estate.

You May Like: What Is Donald Trump Poll Numbers